The roads were worst on 520 in Redmond (as well as Bellevue), the land of millions of Microsoft money than in Tacoma, Federal Way, and Renton.  Looks like Bellevue needs to invest in some snow plows.  The city of Tacoma was probably the best prepared of the area. Probably not the best day for tennis.  The courts at the Bellevue Club in central Bellevue. Snow and ice is pretty bad for business… including the gym. 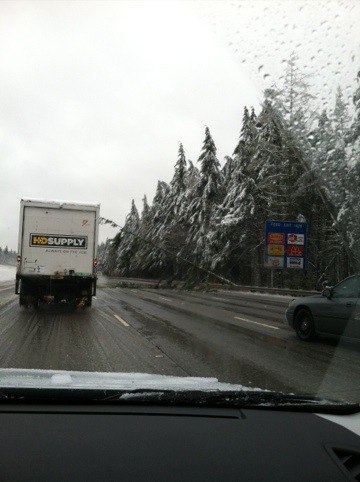 The snow turned to frozen rain in the AM.  Ice over trees that fell on power lines and blocked roads.  Blocking Southbound I-5, all three lanes. The falling trees took their toll on the Federal Way area.  Not far from here, Costco was closed because they had no power.  Across the parking lot Home Depot was busy… Pays to have a back-up generator.  Way to go HD!