Today I enjoyed a nice lunch with two CEOs of well-known companies on the 51st floor of Roppongi Hills complex.  I finished the meeting and jumped on the subway train heading up to my Tokyo office.

Twenty minutes later I was at my station up the stairs and walking up the street towards my building.  As I rounded the corner, I saw two women run out of the small 1st floor restaurant that worked at into the street.  I felt the earth quake.  It was the biggest jolt I had ever felt in my life.   I was in front of an older building so the last thing I wanted to do was get under falling glass. I ran out into the middle of the three-lane one way street.  Here is the video of that.

The oncoming cars were unaware of the quake and seemed to wonder why people were running into the street.

I waited outside as I didn’t want to take the elevator.  My regular mobile phone did not work so I pulled out my emergency mobile and called the office above me.  They had a great shaking 21 meters above the street.

After about 15 minutes I went up the fire escape to check on people.  The place kept on getting aftershocks rocking the building.

Glass from broken windows lay on the streets.

All the subways and trains of Tokyo stopped and people were stranded at their offices. People rushed to large open spaces which turned out to be parking lots between the buildings. 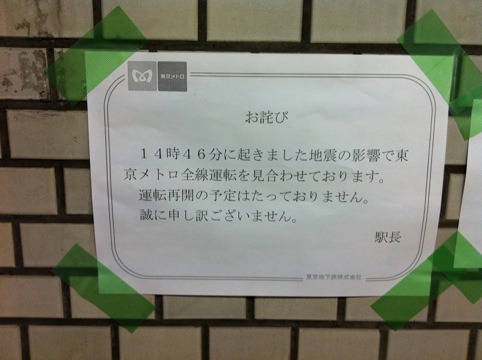 Traffic going everyway out of Tokyo was at a standstill.

We were stuck in the Tokyo office, so we took the coats off a coatrack and made a quakeometer to watch the quakes. 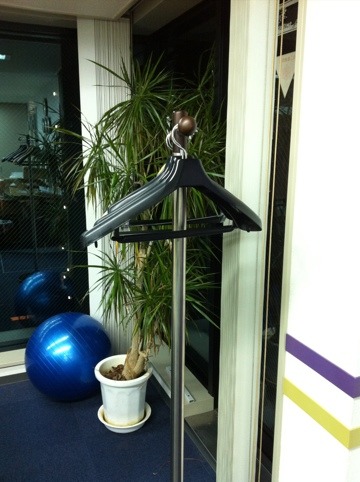 Here is what the cleanest guy in the office’s desk looks like after a major earthquake. 2 Replies to “The Biggest Earthquake I’ve Ever Felt”