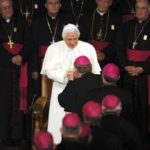 The Roman Catholic Church is essentially all that remains of the great Roman Empire. One of many empires that ruled the known world at one point in history. Many good things have come out of the church I am sure (ie. preservation of the Word of God through hand copying in monasteries). However, as I study the Word of God, the beliefs of Catholicism, and watch the trouble in the catholic church, it is very clear to me that there is something wrong.

If you are reading this and you are a Catholic, I hope that you are following Jesus first and foremost and not any other leader before the King of Kings of the Lord of Lords. There is no intension to be offensive so we pray you read this with an open mind and consider for yourself the practices and beliefs and compare with the Word of God. For any Christian or sincere follower of Jesus (and the Way), it is the priority is to follow after Jesus first, not any man.

Yesterday after 6 hours of study, research, and some review, I have found eight areas that need to be seriously addressed with regards to the Roman Church. These areas are-
1. Father– Believers are only to call the Father Father. We are not to call unrelated people such as pastors or priests “father”. Unfortunately, the pope is called Holy Father. This is an area of concern as so much honor is given to the minister. I just can’t understand why the old guys would be kissing other old guys hands. There are no cultures like that that I am aware of.

2. Prayer to Dead People– The constant hailing of Mary and prayers directed to her and past saints are concerning. The Word tells us to only pray to the Father in Jesus Name. Why would a believer ever kneel and pray to the statue of some dead person and pray to them. Isn’t that what ‘the heathen’ do? They are no longer around and cannot hear our prayers.

3. Infant Baptism– The Word says we are to believe and be baptized, not be baptized and believe. The Roman church has baptized millions of people as infants which is meaningless according to the Word. It causes confusion as people who don’t know Jesus think they do just because they were baptized. This is very concerning as many people are literally deceived by this confusion and forever separated from the Father at physical death.

4. Celibacy Of Priests– It is completely unnatural for men not to marry. All men and women have a sex drive (especially men) and the Word tells us not to forbid to marry. Ministers should marry and have a great relationship with their wife and children. The Epistles say that leaders of the church must be leaders of their own household first before leading a church family. Could this be part of the reason why we have all this sexual sin recently coming to light in the news? I am convinced it is.

5. Penance– From what we have researched from the Catholic church beliefs, belief is that you attain salvation by going to a weekly mass service, confessing sin to a priest, and the ‘holy Eucharist” (or communion) on top of just turning to Jesus. The Word is clear that salvation comes through Jesus immediately when you confess, repent and live the Way of Him to become pure before Him. Following Jesus is a daily lifestyle.

6. Purgatory– A belief that when you die, depending on your works, you may have to go to temporary ‘holding pen’ to work yourself the rest of the way to heaven. We wonder then why did Jesus resurrect from the dead for us, if we have to work our way to heaven? Further complicating things for the discussion, there is no mention of purgatory in the Word. It needs to be documented 2-3 times at least.
There is mention of Abraham’s Bosom which was a holding places for those who called on the Name of Yahweh before Jesus made them righteous before the Father. You can read about it in Luke 16:19-31. It is now very unrelated as we have Jesus who has made us holy before the Father and He emptied Abraham’s Bosom when He went to hell on our behalf.

7. The Rosary– There is absolutely nothing wrong with praying prayers based on the Word of God or even reading prepared prayers based on the scripture. However, having a priest subscribe you to 10 “Hail Marys” to chant with prayer beads is no different than the Buddhists around the world chanting to try to become more spiritual. The rosary is just like the Buddhist beads we see in Asia and draws away from fellowshipping with the Father. It is not chanting the prayers, it is believing in the Father you are praying to that matters.

8. Transubstantiation– According to Roman church beliefs, the bread and the wine (literally they use wine which is not recommended) used for communion after a ‘blessing’ from the priest, literally becomes the flesh of Jesus’ body and the wine becomes His blood. Where does this belief come from? I can’t find anything in the Word of God to justify or even explain this.

When you look at these areas you see all eight distract from what the Word of God teaches. As a follower of Jesus, I know no church or pastor is perfect. However when we are in error we need to fix things otherwise we will go farther and farther away from Him. I have seen it in my life and the lives of others.

The conclusion is the fundamental of the Roman church is that the belief is the leadership is built on Peter the apostle. The problem is this belief is based on one scripture and what most see as a interpretation. Historically, we have no proof that Peter was ever even in Rome. It takes a bit of imagination but the Roman Catholic church considers itself the one true church as it somehow traces its line of pontiffs back to Peter quoting Matthew 16:18
18 And I also say to you that you are Peter, and on this rock I will build My church, and the gates of Hades shall not prevail against it.

For some reason, it is assumed that what is being said here is that the Messiah is going to build His church on one man. Why would God build His church on one man when one man already failed before. Remember Adam? He messed up God’s plan for all mankind. The Epistles tell us that the church is built on the apostles and prophets not one apostle. IF you read this in context, the Rock that the church is built on is not a man, but the rock or foundation is the fact that Jesus is the Messiah, the Son of God. Isn’t that why we have the Church of Jesus Christ not the church of Peter? Let’s read it in context.

Matthew 16
13 When Jesus came into the region of Caesarea Philippi, He asked His disciples, saying, “Who do men say that I, the Son of Man, am?”
14 So they said, “Some say John the Baptist, some Elijah, and others Jeremiah or one of the prophets.”
15 He said to them, “But who do you say that I am?”
16 Simon Peter answered and said, “You are the Christ, the Son of the living God.”
17 Jesus answered and said to him, “Blessed are you, Simon Bar-Jonah, for flesh and blood has not revealed this to you, but My Father who is in heaven. 18 And I also say to you that you are Peter, and on this rock I will build My church, and the gates of Hades shall not prevail against it. 19 And I will give you the keys of the kingdom of heaven, and whatever you bind on earth will be bound in heaven, and whatever you loose on earth will be loosed[d] in heaven.”
20 Then He commanded His disciples that they should tell no one that He was Jesus the Christ.

We must make this issues clear as people are lost. We see many calling themselves Catholics that do not practice, as they say. Everyone needs to know Jesus and repent and turn to Him. No church is better than any other. However, a good church is a church that follows directions that God has given us for thousands of years. What is it all about? It is all about loving and serving Him.

Whatever church you attend, if it is not encouraging you to seek Him with your all and all, then it is time to change churches. If the presence and power of God is there, then help that pastoral team bring more people to Jesus. He is coming back soon and we must not hide the truth.